February 18, 12:45 p.m.-4:00 p.m. at Georgia State University: Perimeter College – Dunwoody Campus, 2101 Womack Rd, Dunwoody, GA 30338, Building N-C auditorium and café. (If you’re not on our mailing list, use the form here to add yourself so you will get any updates about this meeting.)

This meeting may be recorded; if so, the recording link will be shared in the following month’s eQuill newsletter.

12:45-1:30 p.m. Nosh and Networking Mixer for members and first-time guests in the café Originally from Atlanta, Brynn moved to her husband’s hometown of Rio de Janeiro after college in 2006 and began writing about her experiences as an American in Brazil to help process life in a new country. Her writing is rooted in the power of friendship and family across cultures and languages. She contributed essays to the anthologies Once Upon an Expat and Knocked Up Abroad Again. Her guest posts and articles have appeared on Multicultural Kids Blog, Pack-N-Go Girls, and Hackwriters.com.

Then about a decade ago, Brynn tried to find picture books in English about Brazil for her little Brazilian-American and came up with almost nothing. She expanded her search to chapter books, young adult, and, with growing disbelief, she looked for any fiction book with a connection to Brazil. Her research made one thing clear. In the United States, it’s easier to find a book set in outer space than in Brazil.

Eventually Brynn had a radical idea. Maybe she could write the book she wanted to find.

After nine years of writing, three polished novels, more than 150 query letters, two years out on submission to editors, her first novel, Jaguars and Other Game, debuted with Orange Blossom Publishing in November, 2022. Jaguars and Other Game is a historical adventure set in 1809 Rio de Janeiro. Kirkus Reviews called it “an addictive tale with drama, history, and delightful protagonists.”

Whether inventing an alien society, recreating the court of Charlemagne, or describing a trip to the grocery store in present day Atlanta, creating a realistic setting requires the author to write characters of cultures and backgrounds different from their own. Understanding what culture is and how combinations of cultures shape identity can help writers create realistic, multi-dimensional characters while avoiding stereotypes. Brynn Barineau uses her background in international communication and international education to teach writers how to write believable societies filled with unique individuals. 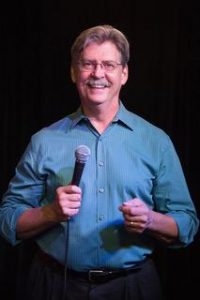 During his presentation Jeff will point out and discuss what he considers to be the 20 + Mistakes People Make Using Humor. Jeff finds that many otherwise funny people do things that stop them from getting laughter. Most of his advice can be applied to writing as well.

Jeff’s first comedy appearance was at the excelsior Mill on North Ave., in 1980. He got $10, a slice of pizza, and a beer. Apparently, he received enough laughs to inspire him to move to NY and start working the showcase clubs like The Comic Strip, The Comedy Cellar, and Dangerfield’s where he says he got seven dollars a night and no pizza.

While in NYC he improved his comedy routine and started playing other local clubs and cruise ships. He got noticed by the owners of the Punchline in Atlanta and an April booking in 1982 started him off on his career as a touring comedian playing clubs up and down the East Coast, Texas, Chicago, Missouri, and California.

He started headlining clubs with his Comedy/Magic act and eventually caught the eye of booking agents who were looking for a funny, clean performer for their corporate clients.

As a member of NSA, National Speakers Association, Jeff achieved the title of CSP, Certified Speaking Professional, the highest earned destination for speakers in the world. Less than 7% of speakers have received this honor.

Jeff has been refining his teaching techniques since 1990 through the “Jeff Justice’s Comedy Workshoppe.” He’s considered one of the country’s top teachers of comedy. Many of his 3,000 + past students have gone on to achieve great success in business, comedy, and professional speaking as well as in their personal lives. His graduates Include Charles Brewer, the founder of Mindspring, and Sara Blakley, the founder of SPANX.